The other day when we were out and about, I came across a great idea for keeping a tab on how often you wear the things in your wardrobe.

It was a set of tags on which you write down the last time you wore an item, had it dry cleaned, washed it, etc. I didn't take a photograph, because they were placed right by the till and I would have felt silly. When I got home I checked out similar ideas on Pinterest, but the only one I could come up with was this one, which is apparently by Anthropology. I thought these were a genius idea, but didn't want to spend £4 or more on a set, so I decided to do my own hack.  Here's what I came up with. 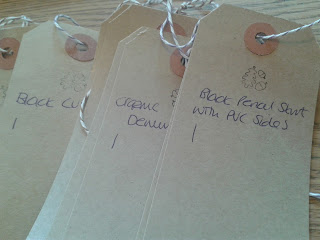 From my point of view, I was only really interested in knowing how often I wear an item.  I don't have many dry clean only garments and I don't care about documenting what goes with what, so I decided to make them very simple with the name of the garment and then create a tally for each time I wore them. 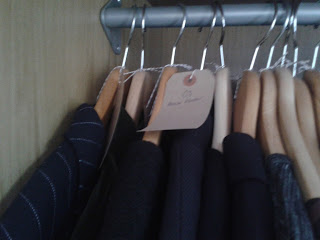 I had lots of buff tags that I needed to find a use for and this was the perfect project for them. I wrote a brief description of each garment on them and then strung them with some fancy string from my craft supplies and hung them to the relevant coat hanger. 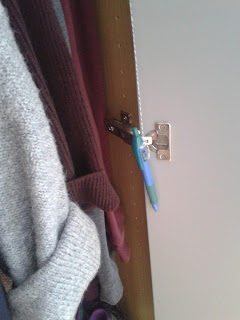 I also hung a pen from some string just inside the wardrobe door, so I could reach for it when I get dressed and put a mark against each item I wear as I get dressed.  This will hopefully encourage me not to forget and as well as being a visual reminder, it meant that I didn't have to hunt around for a pen.

As I was doing this hack immediately after getting caught up on my ironing,  most of my clothes were in there, but I tried to make tags for every item of clothing I could think of that I had, including those that might be in the wash.  Anything I'd worn in the last week I gave a mark, as I have actually worn some little worn things this week for a change. I also made a few spare blank tags for items that I might have forgotten or that might get added in the near future.

It sounds a lot of faff, but it only took about an hour to set up the whole system. I just have to make sure I stick to using it.  Even if I only use it for items I'm thinking of getting rid of because I rarely wear them, it could help me when it comes to my next wardrobe edit.

One of the most satisfying things about this project was to have an excuse to use some of my craft supplies, which otherwise might not get an airing.  After all, that's what I bought them for.
Posted by johnnyjumpsup at 03:21