Back to blogging at last.  It's been a bit mad lately, not in a particularly good way.  Just busy at work.  I'm now part way through three full days off, which is great, so I have enough time and energy to catch up on the blogging front.

As I mentioned in a previous post, the original Shop Manager is coming back to the shop soon and my contract will be ending in April.  The Deputy Manager, who has been the Shop Manager for the last two years is, however, definitely reducing his hours and so a permanent part-time vacancy will be available at the shop and will be advertised soon. I will need to reapply, which I probably will.

In the meantime, we are precariously short of volunteers and so I have been especially busy of late participating in a recruitment campaign for the shop. I've managed to recruit a few volunteers so far, but as quick as I recruit, other volunteers are leaving or reducing their hours, so it's a bit fraught at times.

However, we've been lucky enough to secure two new interns this week, for the next 3 months, so this should ease things somewhat once they are trained up.

My role has changed a bit over the last few weeks on account of a longstanding volunteer moving on to a full-time paid job outside of the charity. I have subsequently had to take over the work they were doing, which is a very critical role in the shop.  It still involves working on the clothing, so combines with what I was doing before, but is more far reaching and time consuming.  This has made it very tricky to get everything done that needs doing.  So far we are just about managing, but I have been working extra hours in order to do so.  I'm hoping it's just a short term thing.

Enough of work.  We managed a few days away last week during half term.  LB wasn't too happy to go anywhere as she has mock exams this week, but a stay in an apartment on Brighton Marina was enough to tempt her.  The dog came too, of course.

It was a nice couple of days. No cooking, as we ate out, and just generally relaxed. Not doing any work from home was enough for me. We walked along the front into Brighton town one day for lunch, which was nice.  Unfortunately, we left lovely sunshine in London to stay in a fog pocket.  The sun did appear on the one day we were out and about in town, but over the Marina it stayed mainly overcast during our stay.

It didn't really spoil our stay though, as the apartment was nice and had very calming and restful views of  Brighton Beach and Pier and there were lots of restaurants a very short walk away. It was a much needed rest.

In other news, I managed to get tickets to Wimbledon again this year in the ballot.  They are for Centre Court on the first Friday of the tournament.  I was shocked at the price, which seemed very expensive, but it is a fabulous day out and OH loves to go too.

Our new frost free fridge freezer also arrived this last week, which is great.  I stocked it up yesterday when I did a big shop.  It seems to fit everything we need it too.  We were almost sad to see our old reliable fridge freezer go, but it had served us well and finding time to defrost it was getting trickier, so we've now entered the modern age of frost free. Here's a picture of the new model; 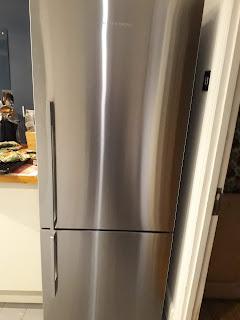 OH advertised the old model on Freegle or somewhere similar and someone came and took it the same day.  Hopefully, it has gone to a good home and will serve another household for a few more years.

I managed to get myself out into the garden for the first time this year when the sunshine appeared a couple of weeks ago.  It felt so good.  I always realise how couped up I feel in the winter, once I start to venture into the garden again.  I only managed to clear the raised beds of dying plants and weeds, but it is now ready to sow salad seeds into for this year. I'm going to try to do that today.

I haven't had the time or energy to venture to the allotment yet, but I'm due some leave in March, so all being well I will get there then and also get around to spring cleaning the house too. I've been so busy sorting through everyone else's stuff at work, that my stuff is starting to build up again and I need to do a good declutter. It's been crazy how many donations we've been receiving lately.  I'm not complaining, as it's good for business, but I'm beginning to wonder if everyone has been watching Marie Kondo on Netflix.

I've been getting to the gym a little bit, but not as much as I'd like.  This has been complicated lately, by the fact that the fitness studio at the gym I go to is being renovated and classes are now taking place in the large foyer of the leisure centre, on a ceramic tiled surface! Not the best circumstances for jumping around doing aerobic exercise, so I've limited my attendance at the moment, as I'm scared to injure myself. Hopefully, we'll be returning to the newly refurbished studio sometime soon.

There's not much other news to tell you, but I hope you are all keeping well.  I'm still reading where and when I can, so you may see the odd comment on your posts.  I hope to get back to more regular blogging soon.

First of all, another apology for being so absent from my blog.  I'm trying hard to keep in touch and still reading as many posts as I can.

Things are changing again at work. I was told this week that my Fixed Term contract is ending early in two months time, on account of the original Shop Manager returning to the shop in a couple of weeks time, due to his secondment ending.

There may still be a chance for me to have a paid position, but there are no guarantees. I'll let you know how it pans out. In the meantime, work is crazy busy and we have very few volunteers to do the work.  Same old story really.

Anyway, less of work, I have a week off next week for half term, which I am looking forward to. I really need to get on top of the housework and we may go away for a few days, somewhere in the UK.

It's getting to that time of year when I need to do some work at the allotment.  For the time being, it has been covered in horse manure and we will be digging it in over the coming weeks in preparation for some sowing and planting.

OH has ordered us a new fridge/freezer, so that should be arriving pretty soon, and he invited builders around the other day, to get a quote for some interior decoration work that he just doesn't get the time to do these days.

I managed a meal out with friends from the gym last week, in a restaurant near Canary Wharf, which was nice.  It was good to catch up after not seeing much of one another for a few months.

LB worked her first day in her new part time job last weekend and she loved it. She was helping out at a vintage clothing kilo sale and really enjoyed it. She'll hopefully be working one day each month when they have the kilo sales, which isn't too onerous, considering that she's studying to sit her GCSE's this year. It will be good for her to have a little distraction from all of the studying.

Not much other news going down here, but I'll keep you posted.