Last weekend, my good intentions to tidy up the garden, just didn't come to fruition, which is so often the way of an expert procastinator like myself.  Everytime I looked out of the patio doors whilst sat at my kitchen table, there was a guilt ridden reminder of my inability to apply myself to the task and get it done.

This weekend, however, was a different matter.  LB, having had a sleepover with her friends the night before, was happily ensconsed with them in her bedroom, OH was out on a lengthy dog walk with the resident hound and I took the opportunity to get out into the garden and at least get started on putting it to bed for the winter. 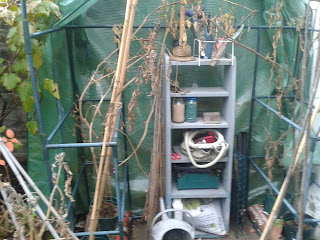 The blighted tomato plants were looking particularly depressing and just needed clearing so that I could pull the cover back over the greenhouse and safely tuck my succulents away for the winterl. 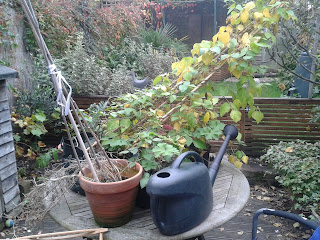 The runner beans and sweet peas also needed clearing and although the bean plants were still thriving, they were no longer offering up any pods and were blocking access to the garden, so it was time to go.

In addition, the decking was strewn with leaves and taking on a very neglected demeanor. 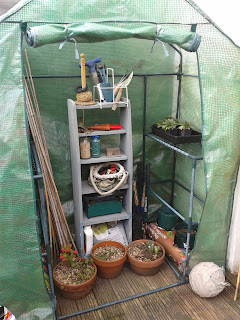 It didn't take long to make a difference.  After just two hours it was a whole other story.  The green house was looking snug in it's winter jacket, The table cleared of dead plants, which were replaced by a bit of colour in the form of a box of still flowering (just) red geraniums.  The decking was swept and cleared and generally looked a lot more cared for. 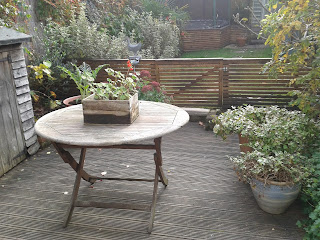 There's still more work to do.  I still need to remove the grow bags from the greenhouse, but am waiting until I've cut down the diseased apple tree, as the soil from them will go where it is currently standing. I did start on cutting down said apple tree, but ran out of space in the brown bin and required the assistance of OH's brute strength and expertise with a hand saw, so we will finish this job another time.

I also still need to sweep down the side of the house, where there are still lots of leaves, but more will be added yet when they drop, so if I don't get around to doing this for a few weeks at least I might only have to do it the once.  The end of the garden will be tackled later, once I've got the end closest to the house in shape.

It's looking a lot less guilt inducing now, and when I gaze out of the window, as I do multiple times per day,  it makes me grateful to have such a small and easily maintained garden.

Posted by johnnyjumpsup at 04:35