This weekend felt little more productive than some lately. On Saturday, I treated myself to a leisurely morning painting my toenails. It's a small thing, but I haven't done it in a long time. At least I now feel summer ready, especially when I wear flip flops or sandals.

After brunch, OH and I headed off to B&Q and ASDA to get a few things we needed over the weekend. I needed some more houseplant compost, to pot on some small plant babies and top up the plant I'd potted on the day before. I also wanted a small rosemary plant for the garden. OH needed some bits of wood to use for DIY and he also bought us a new 210 litre waterbutt, as our old one had long ago sprung a bad leak and was taken to the tip a few weeks ago.

From ASDA, I needed a few toiletries, and some bits and pieces of food, but was tempted by a dress, which I ended up buying. It was £16 and I thought it might be nice for our summer holiday. I'm afraid I couldn't upload the picture after several attempts, but it was a zebra print shirt dress.

Other than the few groceries we needed, we bought a new kitchen bin, as the latch on the lid of our current one has broken and it was difficult to open. I'll use the bottom half of the old one for potting on a tree or shrub. OH has already drilled some holes into the bottom of it for me.  He also set up the new waterbutt. We just need rain now. 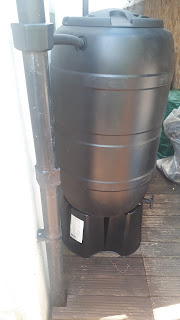 The new kitchen bin isn't quite as big as the old one, which is good, as it will encourage us to create less waste and also takes up less space in front of the washing machine, making it easier to access. It also has a much simpler opening mechanism, either swing or lift up, with no catches or springs that can break easily.

Here's a picture of the new bin: 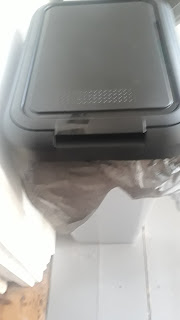 On Saturday afternoon, I took a bowl of water and some kitchen towel into the living room and dusted the leaves of some of our bigger houseplants, that were looking a bit dusty and neglected, but now look nice and shiny. I potted on a couple of plant babies and I'm hoping that they survive the separation from the mother plant. 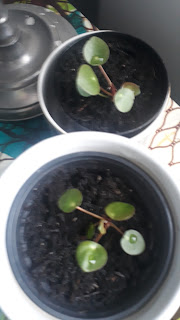 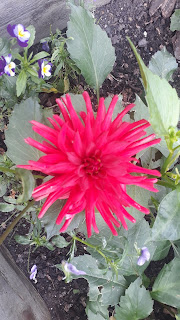 In the garden, my dahlias in the raised bed are starting to flower. I particularly like this lovely red one.  Talk about sacred geometry. It's so beautiful. The mulberry tree is now producing quite a few berries too. They have the most amazing taste. Quite unlike other berries. I enjoy picking them off the tree and eating them.

On Sunday, I did some more ironing and put away lots of laundry, which cleared some of the clutter in the dining room. In the evening, I enjoyed watching Glastonbury again, especially the Pet Shop Boys and Years and Years.

Posted by johnnyjumpsup at 07:53