This month many of my favourites have been beauty products once again.  I've finally used up some old products, so I've been trying out new to me products and some of them have been really nice and I'm enjoying using them. 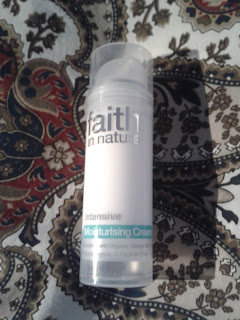 The first product has been this moisturiser by Faith in Nature.  I bought it a while back, when the Neal's Yard one I'd been using for a few months, was starting to get low. That has now been completely used up and so I opened this one. It has a similar slightly waxy feel to it like the Neal's Yard one, and as a consequence, I don't tend to wear it under make up, but reserve it for use on a night when I go to bed.  I like it though and it was very reasonable at £7 or £8.

In a morning and under makeup I've been using up lots of sample sachets that I've had kicking around for a while, in the hope that I would stumble upon something that I liked. I've decided that serum is the way to go in the daytime and moisturiser at night, at least until I can find something that fits both. 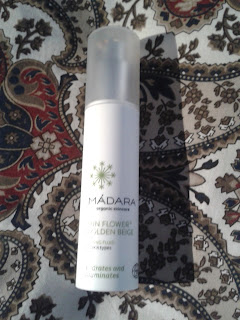 The other product that I am really enjoying using this month, is this tinted moisturiser from Madara, which I finally plumped for, after using up lots of samples. It was quite pricey at £23, but I managed to get 20% off  and free postage when My Pure had an offer on. Strangely, it smells like pea pods, which reminds me of shelling peas as a child. I like it and it is a lovely light coverage, so doesn't look too heavy.  It doesn't have SPF unfortunately, but that shouldn't be too much of a problem during the autumn/winter.

The next favourite this month has been a recipe I gleaned from Sophie's blog for a Happy Pantry Slice, made from various pantry staples, plus some chocolate.  It was gorgeous.  I made some the other week and again last week. Perfect cycling food for OH, to keep his energy levels up. In fact we all really liked it, so I have a feeling it will become a firm favourite.  I tend to tweak it according to what I have in my cupboard at any point in time and these were the ingredients I used.

I combined the dry ingredients first, then melted the butter and honey in a pan on a low heat before adding it and then put the whole lot in a lined tin.

The second time I made this I didn't use as much butter as we were low and I left out the bicarb of soda in Sophie's recipe, so it did come out a little drier.  I also had previously used wholemeal self-raising flour instead of white, so it previously looked a little darker too, but it was still nice.  If you want to cut down the calories, instead of coating the top in chocolate, you could drizzle melted chocolate back and forwards across the top, so you get a taste of it.

You bake it in the oven for 15-20 minutes at 180 degrees, but I found it browned up very quickly and I had to place some foil over the top of it after 10 minutes or so, to stop it from burning. 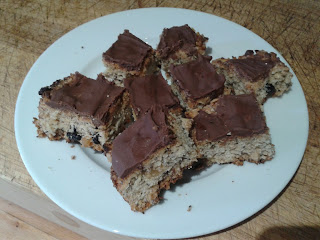 A very tasty treat which made us very happy indeed. Thank you Sophie for sharing the recipe.

Finally, I have one other favourite to share this month and that is another Netflix series that I've been getting into.  It's called The Glades and is a Police series set in the Everglades and surrounding areas of Florida.  I've been really enjoying it.  Anyway, here's the trailer for anyone who gets Netflix.

Posted by johnnyjumpsup at 07:02