After spending all summer waiting for the next Give and Take event, so that I can donate the pile of things I've decluttered and which is currently taking up most of the sewing room, I read the other day about one coming up in two weeks time.  I can't wait. 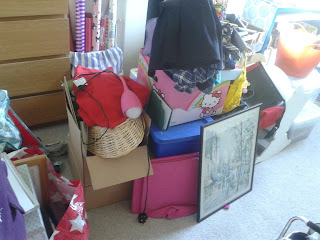 I did take a suitcase and large bag of clothes to the charity shop in an attempt to relieve the house of some of the pile, and some of the books went to the Little Free Library, but the bulk of this is definitely going to the Give and Take.  I'm sure there are plenty of families that will be glad of LB's books and toys and the various bits of home ware that are contained in the pile.  I, meanwhile, will be totally relieved to have my sewing room back and to be able to get on with some work in there.

In addition to the pile, there's a child's bike in the garden, that LB has outgrown and which has already been replaced by a more grown up bike, so that will be making it's way to the Give and Take too.  I'm sure the house is already breathing a sigh of a relief at the prospect.  I definitely am.

I also read the other day, that a forthcoming Jumble Trail event in another part of the borough, has been cancelled, as the Council don't have enough staff in the Waste Collection department to cope with that and a carnival that is taking place in the borough on the same weekend. There were suggestions in the article I read, that there had been 'problems' after the previous Jumble Trail in my neighbourhood, with people leaving stuff out on the street afterwards.  It seems a pity that a few might have spoilt it for others by doing so.  The organisers, however, argued that this was not the case and that it all went smoothly.  It will be interesting to see if they are given permission to host here it next year.

By way of an update, after reaching my 1000 items decluttered from our house so far this year, August has been an incredibly quiet month on the decluttering front. (partly because we were away of course)  I only managed to declutter a further 18 items last month, but that's 18 more belongings I no longer have to worry about (once they've gone to the Give and Take that is).  This month is already looking like it will be an improvement, as I have already put aside some items from my and LB's summer wardrobes that we no longer want to keep and with Christmas approaching, I'm sure there will be other things I find that I will now be happy to declutter from the boxes of decorations.

If I do manage to get everything out of the house at long last this month, I will be ecstatic.  I definitely think that taking things for donation more regularly as I gather them, is definitely the way to go in future, especially now there's less decluttering to do, otherwise it all just gets way too overwhelming.

Nevertheless, I'm not giving up and rest assured more 'stuff' will be getting donated this year if I have anything to do with it. 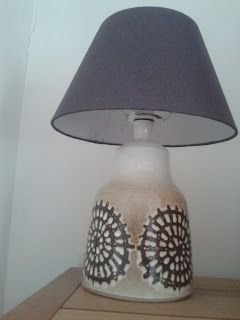 On a slightly different topic, one item I am definitely keeping is this ceramic lamp.  It has sat in various places in the house, unused and without a shade, for several years now. Due to the fact that it has an old bayonet fitting, I hadn't even tried to see if it worked since buying it in a second hand shop however many years ago, as I didn't have a bulb that fitted.

The lampshade that is currently on it is a spare that I was going to donate, but I decided instead to put it on this lamp. It's not the perfect match, but will do for now. I splashed out 59p on a traditional bayonet bulb (I didn't want to spend £4 on an eco one until I knew it actually worked) and tested it out and it does indeed work, which is great news.  It has now been moved to a new location in our second reception room and will be finally put to use this autumn/winter for the first time since purchase.  It feels good to finally make use of it.  I do have another ceramic lamp base without an electrical fitting, that I would like to get working next, so maybe that will now get done in the not too distant future.  I'll keep you posted.
Posted by johnnyjumpsup at 00:15