Well, it was wonderful having a couple of days off work on Sunday and Monday. I had a lie in on Sunday morning, which was long overdue and then got up in a leisurely fashion, had breakfast and went out with the dog for a nice long walk. She's only been getting short walks from me this past week. OH has been doing most of the dog walking.  It felt good to get outside and breathe in fresh air, after virtually a week of wearing a mask all day everyday.

When I got back, I started to think about what I needed to do at home and in my own life, instead of for work. The ironing pile was stacked high and I'd run out of clothes to wear for work, so that was a priority. I made a grocery shopping list, as we were fast running out of food. We weren't going to starve, but I needed to do a shop on Monday.

I spent a couple of hours on Sunday afternoon napping on the sofa, it was needed after a busy week.  Eventually I got up and did a couple of hours of ironing whilst binge watching Emily in Paris on Netflix. I finished watching the second season. At least I've now got some clean clothes ready to wear for work next week.

Sunday night we watched a programme on TV about some of the male ballet dancers at the Royal Opera House in Covent Garden. It was really interesting.

Working all last week has had a couple of upsides.  One was that it kept me from spending any money unnecessarily, during a very tight month financially, so I'm grateful for that. I'm going to shop very carefully for groceries this month to keep costs down and try to use up stuff we have in the freezer and cupboards. The second was that it also helped me to lose the Christmas weight gain of a few pounds, so another plus.

I bought a few things from the shop on Saturday with some expenses I was owed, mainly presents for LB's upcoming birthday, but a few other bits for the house too. I did buy a couple of baby Scots Pine trees that had been donated and were looking like they were drying out in their packaging. I couldn't bear to think of them dying, so I bought them both. They can grow to 120ft, so they're not going into the ground in our small London garden. I'll control their growth for the time being in pots.

On Monday, I booked a blood test at the doctors for later in the week to see how the statins are working on my cholesterol. I'm almost out of the tablets, so I need to see if I can get another prescription whilst I'm there. I've left it a bit late to be honest, as there were no earlier appointments than Friday and my tablets run out on Saturday. There was one on Wednesday, but at 2.40pm and I really can't fast for that long, which is what I need to do for the bloodtest.

Anyway, I had booked myself into my usual Zumba class for the first time since before Christmas. I had to pay more for it than usual, I think because my membership had expired, so I now need to renew it which is going to cost £20 to re-join for the year. I really enjoyed the class, but felt a bit unfit, as I hadn't been for four weeks.  It was nice to see my friend there though.

From there, I went off to do the weekly shop, first at Home Bargains, then Lidl and then Tesco. In additon to regular groceries, I bought some chewable vitamin D tablets, compost to pot up the Scots pines, as we didn't have any at home and a birthday cake/some sweets for LB's birthday. Otherwise, I stuck strictly to my shopping list. I spent more than I wanted to, but food prices are going up and we needed virtually everything we normally eat, so I just have to spend what I have to spend. I managed to pick up some more lateral flow tests at the supermarket, a box of 20 this time, I didn't even know you could get so many in a box, I've only ever got 7 in a box. They will come in handy this month, as I use at least 4 each week, for work and the gym.

The rest of the day I performed activities such as walking the dog, potting in the garden, catching up on YouTube, making supper and ordering another gift for LB's birthday. I'd almost forgotten what having time off was like, it's been nice to have some time to myself to relax, catch up with friends on the phone and in person and generally just try to get my life back in order.

Here's a picture of the potted up Scots pine treelets. They're a bit spindly, but I hope they survive. 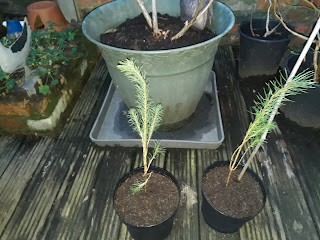 Hopefully, life can now get back to some sort of normality.

Posted by johnnyjumpsup at 11:54