I believe that today, is traditionally known as Blue Monday. The third Monday in January, the point at which most people are at their saddest; as they are broke, cold and disappointed with themselves, over failing to stick to their New Year's Resolutions.

Whilst the latter isn't the case for me, as I didn't make any New Year Resolutions, my Blue Monday didn't exactly get off to a good start. I needed to take the dog out before heading off to the gym and was running late due to not having slept well and not waking until 8am. I managed to get dog poo on my fingers as I was tying up a dog bag. Urgh! (TMI, I know) It doesn't happen often, but freaks me out when it does.

When I eventually left the house, the windscreen on the car was frozen over, just what you don't need when you're in a hurry, but in spite of this, I still managed to get to the gym on time. The trouble started there.  I had had to renew my membership online last week and my card no longer worked to let me through the barrier and into class, so I had to queue to see the one member of staff on duty in the foyer. After 10-15 minutes trying and failing to sort it out, I had to just go in to the class anyway.

Luckily, the class started late. Someone had cleaned the floor in the studio and it was still wet, so a member of staff had been called out to dry it off. As a consequence, I didn't miss any of the slightly shorter class, but I did have to position myself right at the back, as it was the only place there was any room, and I could hardly see a thing the instructor was doing. Regardless, I enjoyed the class and then managed to get my membership sorted out after the class.

When I left there, I set off to do the food shopping. I tried to stick to my shopping list religiously this week, but a few extras did slip into my baskets (food only). I am definitely at that point in the month where I am broke, so that is a bit depressing, but there's only one more food shopping week before I get paid, so I'll just have to eke things out. I did receive a £8 off an £80 spend voucher at Tesco, so that should come in handy for the first week in February, to save a bit of money on my first food shop of next month.

I have tried to set a limit on how much I put on my credit cards this month, but it is increasingly looking like I may have to exceed it. If I do, I do. I'll try to get straight next month. I've needed to spend nearly £300 on gifts this month, for both LB's birthday and my sister's, as she turns 60 next week. Thankfully, next month, there are fewer things I need to spend my money on.

I worked out the other day, that despite my food budget being £400 per month, last year I spent an average of £460 on food each month. I need to try to do better this year.  I have been quite good with regard to spending money so far this month, mainly borne out of necessity, but also with a bit of will power thrown in. There aren't many things that I need at the moment, so I don't feel inclined to shop for anything, either online or in person, so this has helped enormously.

When I got back from doing the shopping today, I got a nice surprise. Over two years ago, I found a nice pair of glasses frames in a local East London charity shop for £3. The frames themselves are Dita Von Teese frames and they are quite solid and well made. They are 1940's/50's in style and I'd wanted to get lenses put in for ages, but didn't have my prescription.  After getting a copy of it when I last went to the opticians, OH sent them off last week, as part of my Xmas present, to an online company to get some lenses fitted.

They arrived today, varifocals in situ and I'm really happy with them and looking forward to wearing them. They're a bit Mad Men, but I like them. Here's a picture of them: 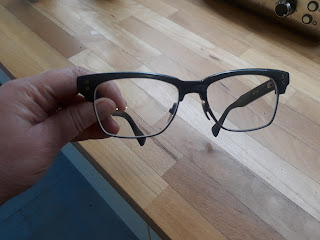 Just out of curiosity, I took a look on the website that sells DITA glasses and similar frames range from £500 to £800. Wow, what a stroke of luck it was, that I found them at the price I did.

This afternoon, I rang my doctor's surgery to see if my blood tests results from Friday had come back and to ask if I could have another prescription for the statins I was put on a couple of months ago. I was told that my liver function tests were normal and my cholesterol had come down from 7.7 to 4.4, which was great news. I'm just waiting on the new prescription now, as I've run out of tablets.

In other news, OH headed off to the vets with the dog this afternoon. She's having problems with pain and stiffness in her front legs. We think it is arthritis and she needs some medication, but she's also having problems with one of her teeth, which we think needs taking out, plus she's got lumps and bumps all over her body, which we hope are benign and nothing to worry about. We hate taking her to the vet, as we generally find them lacking in empathy and we dread that there might be anything seriously wrong with her, as you can imagine.

Turns out, her tooth and possibly others need to be removed and her teeth cleaned. Some of the lumps they are going to remove under anaesthetic too. She was given some medicine for the arthritis and she's been booked in for an operation in a couple of months time, which is going to be very expensive, unless we can get the insurance to pay for some of it. Let's hope so.

So, there was a lot going on today, most of it good, so I can't complain. Not such a Blue Monday.

Posted by johnnyjumpsup at 10:04