After a couple of days in Las Vegas we were ready to set out on our road trip to California.  We took a taxi to the depot, getting there early in the hope of a getting on our way.  Three hours later and we had our van and could finally set off with a mixture of excitement and trepidation.

Here she is.  We called her Skylark and she looked after us well for the duration of our trip in her. 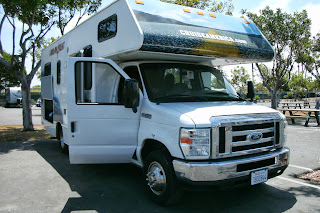 I'll give you a quick photo tour so that you can see how we lived for the 10 days we lived in her. 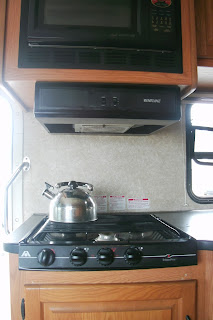 Hob, microwave and extract fan, our sole cooking facilities save barbecues on campsites and the occasional toaster in campsite shops. 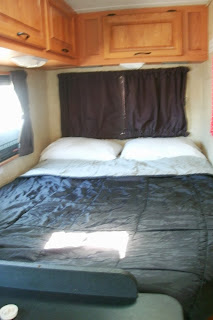 Fixed double bed in the back of the van with curtains you could pull around for privacy. 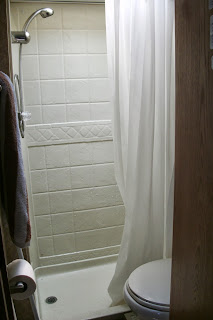 Shower and toilet in the back of the van along with bathroom sink just outside with cabinet above. 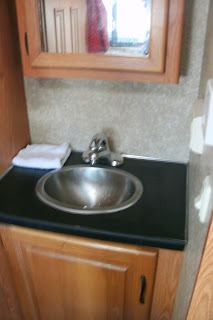 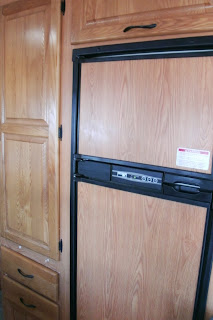 Big fridge freezer next to the wardrobe and drawers for clothes storage. 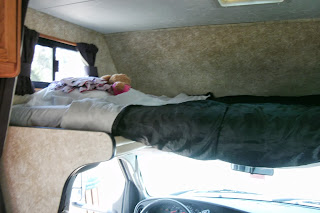 Little Bird's bed over the cab. 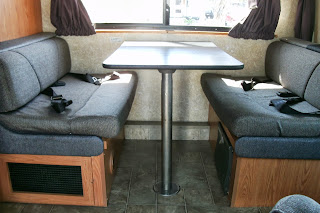 Dining table and benches (which also formed another bed if required) and finally, probably one of the most important things, was the air conditioner which was vital, especially in the desert. 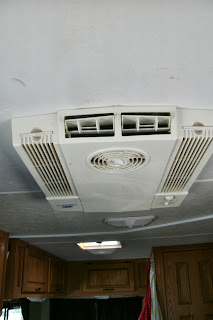 It did take a little while for OH to get used to driving the van.  It was large, although this in itself was not a problem, as he has driven many HGV's in the past both at home and on the continent, but the crosswinds in the mountains and desserts did make it quite tricky to steer at times.  We set off at 3pm or thereabouts, drove straight to the Hoover Dam to take a look, before heading down the Colorado River to a place called Lake Havasu, where having picked up a leaflet in the van depot, there appeared to be quite a few camp sites with pools and it seemed a good place to stop en route to California.

It was quite a long drive, distances always seeming longer in the US than they look on the map, on account of it being such a huge country.  Here's a picture of us driving on that first afternoon.  Note the relative absence of traffic on the desert roads. 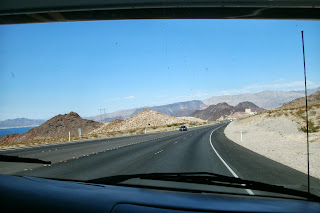 We arrived in Lake Havasu at around 7pm to find that it was the town which now houses the old London Bridge, sold to them in the 1960's.  We were pleased to stumble across it, not having known this when we set out.  We drove across it on the way to the campsite. 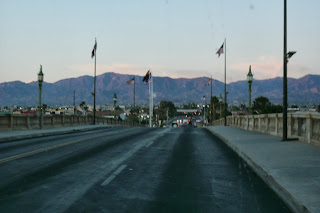 By the time we found the campsite, booked in and then did a shop at the local supermarket so that we could eat, it was starting to get dark and we were pretty exhausted, so we had some food which I won't pretend was anything special as I had not yet put on my campervan cook's head.  In actuality, we bought a hot roasted chicken from the supermarket which we ate with tinned sweetcorn, the remains of which kept me in chicken and mayo sandwiches for the next few days.  We then unpacked and went to bed after our first day on the road.
Unfortunately, it was probably the worst night's sleep I had on the entire road trip as the air conditioning tripped and it was far too hot.  I ended up getting up at 5.30am and trying to figure out how to resolve the problem using the van manual as I just could not stand the heat any longer.  Thankfully, there was a very simple solution and normal functioning was resumed very quickly, thank goodness.
After breakfast we headed down to the small beach where OH and Little Bird took a swim in the lake, 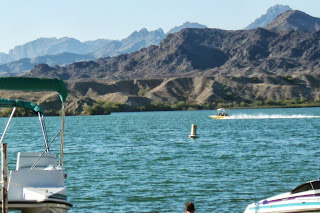 before we all spent a lovely couple of hours by and in the swimming pool which we virtually had to ourselves.  It was immaculately clean, with views of the lake and the sun was scorching hot at 9am in the morning.  We loved this about the desert and very often our day would start in a similar way if the campsite had a pool.  We then set off on what was probably one of my favourite days of the holiday, which I will talk about in another post. 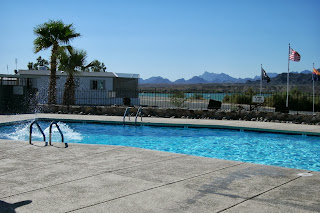 Posted by johnnyjumpsup at 02:20