Finally Getting Out in the Garden

It's been a few weeks since I did any work in my garden at home. I've been itching to get out there and do a little work and some harvesting, however, between doing extra hours at the CS, visiting the allotment and having visitors, I've not really found much time lately, save to harvest a few tomatoes here and there.

On Monday afternoon, the urge came upon me to venture out there and tidy up one of the beds that is currently housing some mustard leaves, spring onions, cooking onions and kale.  The onion sets were planted out a good few weeks ago now, and are sprouting and coming along nicely.  There's a mix of white, red and yellow onions in here now.

I'd been meaning to harvest the mustard leaves for a while and they definitely needed it.  Here's a picture of the harvested leaves, which are mixed with some salad leaves that I bought this week. They definitely add a bit of interest to the salad bowl and have a nice peppery kick to them. 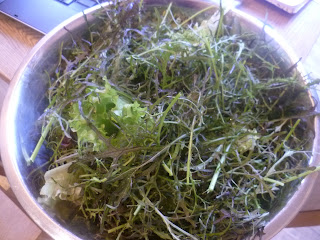 I also harvested almost all of the spring onions that were in the bed and these will be going into my salads this week.

After tidying up the bed, I direct sowed a few more winter salad seeds into it, as the salad seedlings I had been growing in a pot, got eaten by snails. Here's what the bed looks like now. 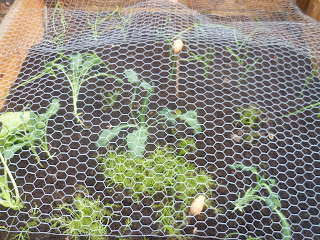 I have to keep the chicken wire in place, as foxes regularly come into the garden and get into the bed if I don't, start digging around and up end all of the plants.


In the other bed there are just the tomato plants left. 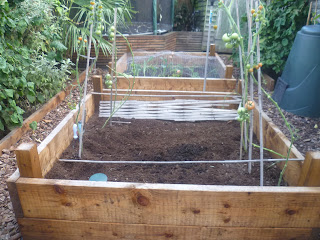 As you can see the tomatoes are gradually ripening.  There's been a little bit of what looked like blight on one of the tomato plants in the small greenhouse, but I quickly cut it out and am hoping that it won't spread to all of the other plants until I've harvested most of the tomatoes.

This bed is going to be topped up with more compost and manure when these tomato plants have died off and then I will sow some broad beans seeds into it to overwinter.

There's a few other things going on in the garden.  I've got some mizuna and spinach seedlings growing in an old recycling box, 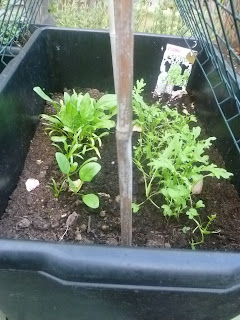 and I am also planning to plant the two rhubarb plants I brought from the allotment into another recycling box when I get some more compost. There's a few sticks of rhubarb on these, that I'll probably harvest when I do this. 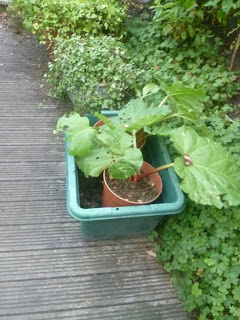 Next year I'm hoping to plan what I grow better and get an even better harvest.  I've been doing okay though and have harvested nearly £90 worth of produce so far this year.

I still need to do a thorough tidy up of the garden, especially around the decking, before my sister arrives, but for now it's looking okay and at least I've got things growing in the beds.

Although I'm intending to grow produce in the beds over the winter, I am looking forward to putting the rest of the garden to bed until the spring.  I might be a bit strange in this, but I just love the process and knowing that I don't need to do anything again until next year.