An Afternoon of Cleaning and Trying Out My New Spiralizer

This week, not everything has gone to plan.  I didn't get the cleaning done that I intended doing on Monday afternoon, instead I spent most of the afternoon shopping for a 50th birthday present for OH's sister.  I found a few small things, as we were planning on making up a hamper of goodies to send off to her in the post.  Hopefully, she'll like it.

Consequently, the cleaning was left until I had some free time today, but I was booked into a class at the gym in the morning and once again, I had to go shopping for a few last minute items for the same birthday gift hamper, so I didn't get started on the cleaning until nearly 3pm.

I concentrated on the the living rooms and managed to hoover, mop and dust them both quite quickly. I'm not going too mad at this point, as our visitor is only here for a couple of nights, but I still want the house to look as clean and inviting as possible.

I then hoovered and mopped the hallway, stairs and vestibule, cleaned and mopped the downstairs toilet and then worked my way around the kitchen worktops.  It didn't take too long and by 6pm I was finished with what I wanted to do for now.

Tomorrow, I'm only at the shop until 2pm and then I'm coming home to clean our guest's bedroom, change the bedding, do another quick whizz around upstairs, before he arrives later that night, so I should have enough time to get everything done.

Having finished today's cleaning, I turned my attention to supper.  My spiralizer arrived today and I was itching to try it out.  Here's a picture of it. It comes with it's own little draw string bag and cleaning brush.  Cute! 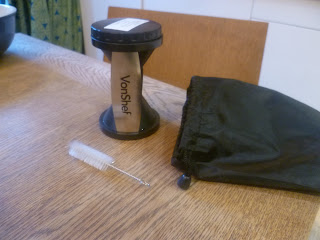 It's a mini version of a spiralizer, as I didn't want to spend a fortune on a larger, more expensive gadget, that I'd need to find room for and this one seems to work just fine, for courgettes anyway.  I did manage to slice one of my fingers on the blade by not following the instructions, but it wasn't too serious an injury.  It could have been a lot worse.  Be warned, if you ever use one of these, don't twist the courgette with your fingers as you get to the bottom near the blade, as this is how it happened. 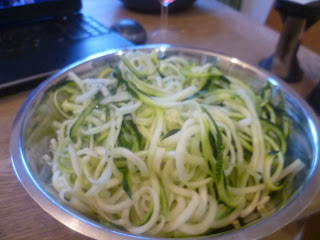 Anyway, four small courgettes, one medium sized marrow and 10-15 minutes later, I had this bowlful of courghetti. 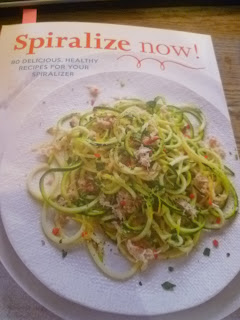 According to this book, that I bought at Tesco for £5 on Monday, whilst doing my weekly shop, you saute it in a couple of tablespoons of oil in a frying pan, then mix in some pesto or pasta sauce.

This book is really pretty good, with lots of recipes for different types of dishes you can make using spiralised vegetables and fruit, such as rostis, noodles, coleslaw, fishcakes, fritters, to name just a few. Some of the recipes don't have photographs, but many do. There are some dessert recipes too, which is useful.

The spiralizer itself, makes both wider ribbons and the thin spaghetti-like ribbons, depending on which of it's two blades you use. I'm not sure yet how well it works on harder vegetables and fruits. I'll let you know.

For £5.49 on eBay, it was definitely worth trying though, even if I don't get along with it, as many of the reviews for these gadgets are mixed, especially for some of the very expensive ones. Reviews for this were pretty good, which is why I decided to buy it.

As a side note, you are left with lots of odd ends of courgettes, that won't spiralize down any further, so I chopped these up quite small, as you can see in the photo below, and froze them for use in casseroles and other dishes. 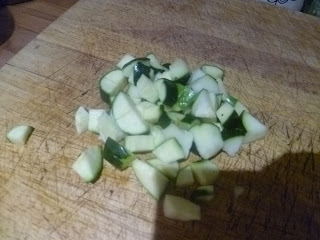 Sadly, when LB and OH returned from their dog walk, they were none too keen on eating the courghetti, so I had to cook them the usual pasta and I had some of it myself.  With pepper, salt, pasta sauce and a few gratings of Parmesan cheese, it looked like this once cooked. 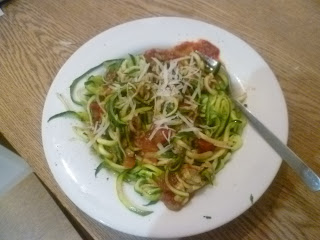 The verdict.  I really enjoyed eating it.  It did become a little watery once cooked, however.  I'm not sure if this was because I sauteed it too long or whether this is normal.  It reduced down on cooking too and I had to cook a bit more to get a bowlful. I would definitely eat this again in the place of pasta, as it didn't leave me feeling as full and heavy as pasta does and I felt pretty full after eating it too. 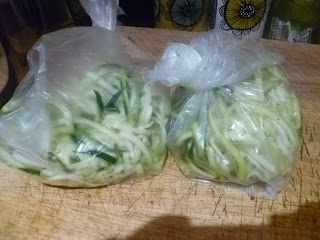 The remainder of the courghetti was popped into freezer bags and frozen for future use, possibly in one of the other recipes in the book. Have you tried spiralizing? What did you think?