This week began with us settling back into London life, after our week away in the Yorkshire Dales. It felt strange to be back, but good to get back to normal.

I began the day by doing the washing up and watering some of our houseplants. I also put on a load of the dirty washing from our holiday and then hung it out.

OH popped out for milk and bread for breakfast and then paid a visit the allotment to harvest some salad and some courgettes that were getting big after our week away. There was one small cucumber too.

Unfortunately, someone keeps vandalising our grape vine through the fence at the back of the plot. In the last few weeks, two of the branches have been cut through and left to die. It makes me very angry, as it is just so unnecessary. We're thinking of taking it out later in the year and planting it at home in garden, away from harm. It was doing so well too and had grapes growing on it. Mindless.

Also a sunflower had got bent over, probably by animals, so OH cut the flower head off and it is now adorning our kitchen windowsill. 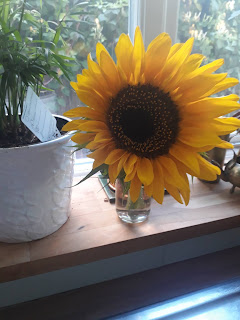 There was very little food in the house on our return, so after lunch on Sunday I did the weekly shop at Lidl. It felt good to get some food in the cupboards again and to know that the job was done for the week. I picked up a couple of extras whilst shopping. 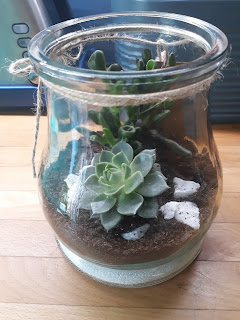 One was this really lovely mini garden in a glass jar for £5. I couldn't resist it for the price as it's so lovely.  The second item was this new moisturising gel that they sell with Hyalruonic Acid. I thought I'd give it a try and at £2.99 it was very reasonable. 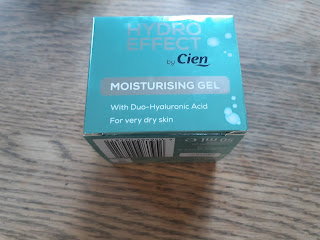 It was such a hot day that I didn't really want to venture outside hardly at all, I spent most of the rest of the day getting up to date with my finances after the holiday and then catching up on my favourite YouTubers and just keeping out of the sun. It's a little too hot for comfort for me at the moment.

On Monday, it was still super hot, so I stayed close to home again and spent most of the day trying to keep cool inside the house. Very hot weather isn't my favourite kind, but fortunately our house manages to stay quite cool, so I spent some time today quietly finishing pulling out the paper pieces from my quilt, so that I can progress to attaching it to the woollen blanket that I'm using as wadding. It was very therapeutic.

Tuesday was my first day back at work after a week off and I'd promised myself that I would ride my bike into work. I did and it was great. Great not to have to wear a mask on public transport, great to be exercising and burning calories and great to just feel the wind in my hair and on my face with no-one in close proximity to me. I didn't realise how much I'd missed it until I did it again. Even getting drenched on the way home when it rained all the way didn't dampen my enthusiasm. (Excuse the unintended pun)

Work itself was okay. I managed to get quite a bit of work done and it wasn't too overwhelming coming back.

Wednesday, I was home all day again. I didn't need to go anywhere, but I did pop to the allotment and pick the blackcurrants that had grown there, plus a few gooseberries. The gooseberries I gave to a neighbour who had told me she loves to eat them raw. There weren't many, as the bush was overpruned last year. The blackcurrants I made into another pot and a half of jam, so we've now had 4 pots from the fruit we've grown this year, which should keep us going for a while.

Later, I spent an hour in the garden deadheading my dahlias, planting up the few plants I'd bought in the Yorkshire Dales, some into bigger pots, as I don't actually have a spot for them at the moment, and some into the ground where I did find a spot. I cleaned up the decking a bit too, but I still need to wash all of the pots we've used this year. It's currently too hot to stay outside for any length of time to do this, but once it cools down and my sunburn and peeling skin recover, I'll do it.

I did some more washing for LB today and tidied her bedroom and then spent most of the rest of the day reading a new book, which was very entertaining.

Thursday, I was back cycling to work again. The stockroom was looking much less overwhelming when I got there, so I was able to get on and get quite a bit of work done again. Donations seem to have slowed down too this week, which has given us some breathing space. Probably due to summer holidays looming and people being busy getting ready to go away.

Friday, was a bit cooler. I took the dog out for a long walk and then needed to do a little bit of shopping. I had a £2 voucher to spend at Lidl, so I headed there first to use it before it expired and then popped to ASDA for anything I couldn't get at Lidl. I bought  quite a few more things than I intended, but at least that will mean just a small top up shop next week. No real sign of food shortages on the shelves here yet which was good.

When I got home,  I did some catching up on my finances and paid the odd bill that was due, etc. I can't believe there's only a week left of July. It's gone so fast. I'll get paid again at the end of next week.

I also did a bit more washing today, so I'm back up to date on that, just ironing to get up to scratch on, but it's too hot for that at the moment. I spent another couple of hours reading this afternoon, which is always a treat.

On Saturday I was quite excited, as there was the first Give and Take or Zero Waste Hub event, as they now call them, happening in our borough since before the Pandemic started. I had a big pile of stuff in the spare room, that I'd been waiting to take and I could finally take it and make some space.

I was supposed to be at work for 12 noon, so I had to arrange to go in a little later, as the event didn't start until 11 am and I'm usually on my way to work by then, but I'd worked a few extra hours earlier in the week to compensate, so it was fine. It felt so good to finally let go of more clutter. They are getting slightly more picky about what you can donate, but everything I took they accepted, which was good. In the end I got to work at my usual time, as we were in and out within minutes. I think there's another event in September, so I will try to collate more stuff for that over the next couple of months. Covid allowing.

As it rained heavily on Saturday morning, I didn't ride my bike to work and caught the bus instead. I don't mind getting wet coming home, but it is miserable getting wet on the way to work. When I got to work, I saw and spoke to a regular customer that I haven't seen for a while. (I don't get to spend much time on the shop floor these days) She made some very kind but astute comments to me, which was very strange, as I'd been chewing over a few issues I've been having at work lately on the bus travelling in. I can't really talk about them here, but her kind comments were very gratefully received.

Anyway, it was quite a productive day. The stockroom seems to be under much better control at the moment, mainly because of the slow down in donations. It might not last though, so I won't get too complacent about it.

I hope you've had a good week.

Posted by johnnyjumpsup at 08:39

My name is Ann. Welcome to my blog.

I live in East London with my partner and daughter and work part-time managing a Charity shop.