A Quiet and Relaxing Christmas

Christmas Day here was a very relaxed affair. I woke up and stayed in bed to read for a little while, before getting up and getting ready. There was a bit of tidying up to do from the night before and a few more presents to put under the tree, but once this was done it was time for breakfast.

We like to treat ourselves to soft boiled eggs and soldiers on Christmas morning. Don't ask why, it's a kind of holiday treat, that we indulge in when we have a bit more time. By the time we'd had breakfast it was about 11.30am, so I decided to start off the meat in the oven and I also prepped a few veggies ready for our Christmas Dinner. We were having lamb for Xmas dinner, one of the only days of the year that we have a joint of meat, and we wanted to eat at about 1pm, so we opened our presents as the meat cooked and I kept popping back into the kitchen to put other bits and pieces into the oven.

Present opening was relaxed too. LB seemed to love all of her presents, which was a relief, as did OH, so I felt like I'd done okay this year for once.

After lunch, I had a very leisurely afternoon, watching the Queens speech, Mary Poppins Returns (which was great) and a few other things on Netflix. I ate far too much unhealthy food, drank too much alcohol and barely ventured out of the living room for the rest of the day, save to get another drink! Everything one expects to do on Xmas Day. I enjoyed the day though and needed it to just unwind from the stresses of work over the last few weeks.

In between, I messaged a few friends and family members to wish them a Happy Christmas and thank them for gifts, and that was about it.

On Boxing Day, after not sleeping too well, I woke up and did a bit more reading. I decided that after the disaster that was my finances heading into this Christmas, I was going to devise a strict budget for 2022. I'm done with being broke in the lead up to Christmas and I'm going to put money aside next year for all the gifts I need to buy throughout the year, so I don't have to rely on my credit cards at the last minute again. There will be a bit of a lag before I'll be able to start this, as LB's birthday is in January, as is my sister's 60th and there's a nephew turning 18 in February too, so from March I'll be putting a sum aside every month for gifts I need to buy for the remainder of the year and keeping strictly within the budget I've set myself, to stop myself overbuying.

I also created a strict budget for everything else and I'm going try my hardest to stick to it this coming year. I'm going to try to do this by deducting every expenditure in each category, as I spend it and when the budget is used up in a category, I can't buy anything else or I'll have to find money from other categories. That should help me to be more careful.

Eventually, I got up and got ready, had breakfast and then set out to walk the dog.  It was good to get some fresh air after a whole day cooped up in the house on Christmas Day. 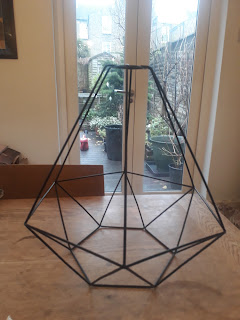 On the dog walk, I picked up this lampshade that someone had left outside their house, to be taken by anyone who wanted it. I'm going to put it in the spare bedroom, as I need a new lampshade in there. It's purely decorative, of course, as it has no actual shade to it, but it is a bit more modern than the one I've currently got in there. I may need to buy a new fancy bulb for the light fitting, but that shouldn't be too much of a problem. I love picking up free things.

Anyway, we continued on the walk and then I came upon some volunteers handing out lateral flow tests in the main shopping street, so I took a couple of boxes, as they were like gold dust before Christmas and I'm almost out of them. With Omicron so rife in London at the moment, I need to test regularly before going to work or mixing with others.

For the rest of Boxing Day, I tried to stick to somewhat healthier eating than I'd managed on Christmas Day, eating more salad and fruit and I tried to drink less alcohol too. Just one drink today.

On Bank Holiday Monday, OH headed out to collect our car from Central London. I didn't mention this in my post on Xmas Eve, as it was a bit of a downer, but we had an accident on our way home from Central London on Christmas Eve. No one else was involved and no one was hurt, but OH curbed the car badly and blew out two tyres.

As we only had one spare, we had to leave the car in Central London and get an Uber home.  We arranged for the car to be recovered by our recovery service today, as we weren't sure if the suspension might have been damaged.

Anyway, as it turns out, the car is fine. The tyres have been replaced and the suspension has been checked at a garage, so we were very lucky. At one point we were thinking it might even have to be written off. It's such a relief to have it back in working order again. The thought of possibly having to buy a new car was really quite upsetting, although I did put it to the back of my mind over Christmas, as I didn't want it to spoil the holiday.

Anyway, today was about getting back to normal. I did a lateral flow which was negative, before going back to work tomorrow. I did some washing and then spent the afternoon tackling some ironing so that I had something to wear to work tomorrow, all whilst watching My Fair Lady on the TV. I also managed to watch West Side Story for the first time in my life. A sad tale, but a good film.

I let a £10 voucher at Lidl lapse today. We really didn't need any more food, as we've still got so much left to eat. I probably could have used it to overstock on something or other, but you know what, I just preferred to stay home and watch a movie. Maybe this was a bit wasteful, but I'm sure I'll earn more vouchers in the coming year, just from doing the weekly shops, so I'm not going to give myself a hard time about it.

I'm not really looking forward to going back to work tomorrow, but at least it will feel like life is getting back to normal.

Hoping you guys have have a lovely Christmas.

Posted by johnnyjumpsup at 11:41